The Green Bay Packers’ massive investment in pass-rushers has an opportunity to provide the ultimate reward against Tom Brady and the Tampa Bay Buccaneers.

The NFC Championship Game might come down to whether or not the Packers can put consistent pressure on Brady, the 43-year-old quarterback with six Super Bowl titles.

GM Brian Gutekunst spent significant capital – both in terms of dollars and draft picks – preparing for a moment much like this one. Signing Za’Darius Smith and Preston Smith as free agents in 2019, drafting Rashan Gary with the 12th overall pick in 2019, and re-signing Kenny Clark ahead of the 2020 season were all notable investments in the disruptive ability of the Packers’ defensive front.

Now, the four can pave the Packers’ path to Super Bowl LV.

Defensive coordinator Mike Pettine may attempt to blitz Brady. Pressure in the matchup is paramount; Brady’s splits while operating from a clean pocket and under pressure are staggering.

The Packers only pressured Brady five times in the first meeting. He picked them apart.

Two factors worth noting from Week 6: Clark was playing in his first game back from a groin injury and wasn’t yet fully healthy, and Gary played just 17 snaps. Clark is now healthy and back to dominating the interior, while Gary has emerged as a legitimate difference-maker as an edge rusher to end his second season.

The two could be vital for the rematch. Getting inside pressure is key against any quarterback, but it’s especially important against Brady. Clark can collapse the pocket with power and use his quickness to win on stunts and in one-on-one battles against guards and centers. Za’Darius Smith might be at his best when rushing inside, and Gary’s consistent performance on the edge should give Pettine opportunities to slide Smith inside for advantageous rushing opportunities against lesser blockers.

It’s hard to see a way for the Packers to beat Brady and the Bucs without a big afternoon from the pass-rushers. Tampa Bay is loaded with weapons in the passing game, and Brady is among the best in the business at distributing the football from clean pockets. Give him enough time, and he’s going to find Mike Evans, Chris Godwin, Rob Gronkowski, Antonio Brown, Tyler Johnson and Scotty Miller for big plays.

But the Packers should be entering Sunday with a sense of optimism about getting to Brady. Pettine’s defense got through a strong offensive line and pressured Jared Goff on nearly 50 percent of dropbacks in the divisional round. Clark is starting to take over games. Gary has been one of the best edge rushers in football over the last month. Za’Darius Smith is good for 3-4 great pressures every game. Even Preston Smith is finding ways to impact games, even when he isn’t getting to the quarterback. And it’s possible Kinglsey Keke will be back after missing games with a concussion.

The Packers did considerable work to rebuild their pass-rush over the last two years. On Sunday, the group assembled by Gutekunst has a chance to stamp the Packers’ ticket to Tampa Bay. Get to Brady, get to Super Bowl LV. 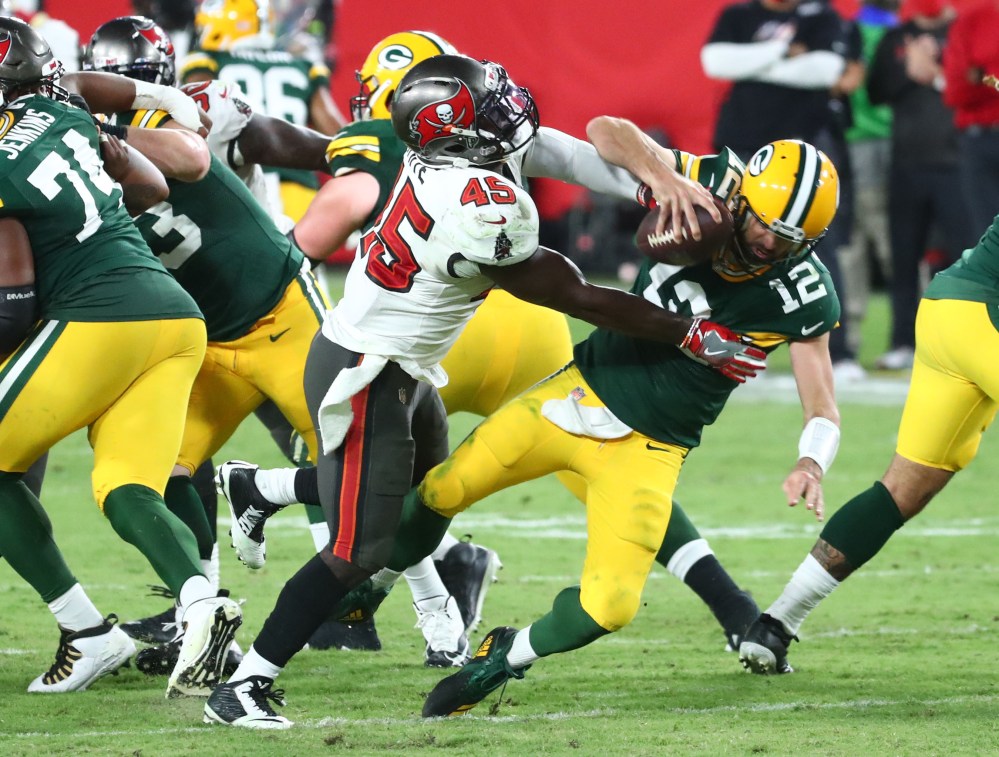