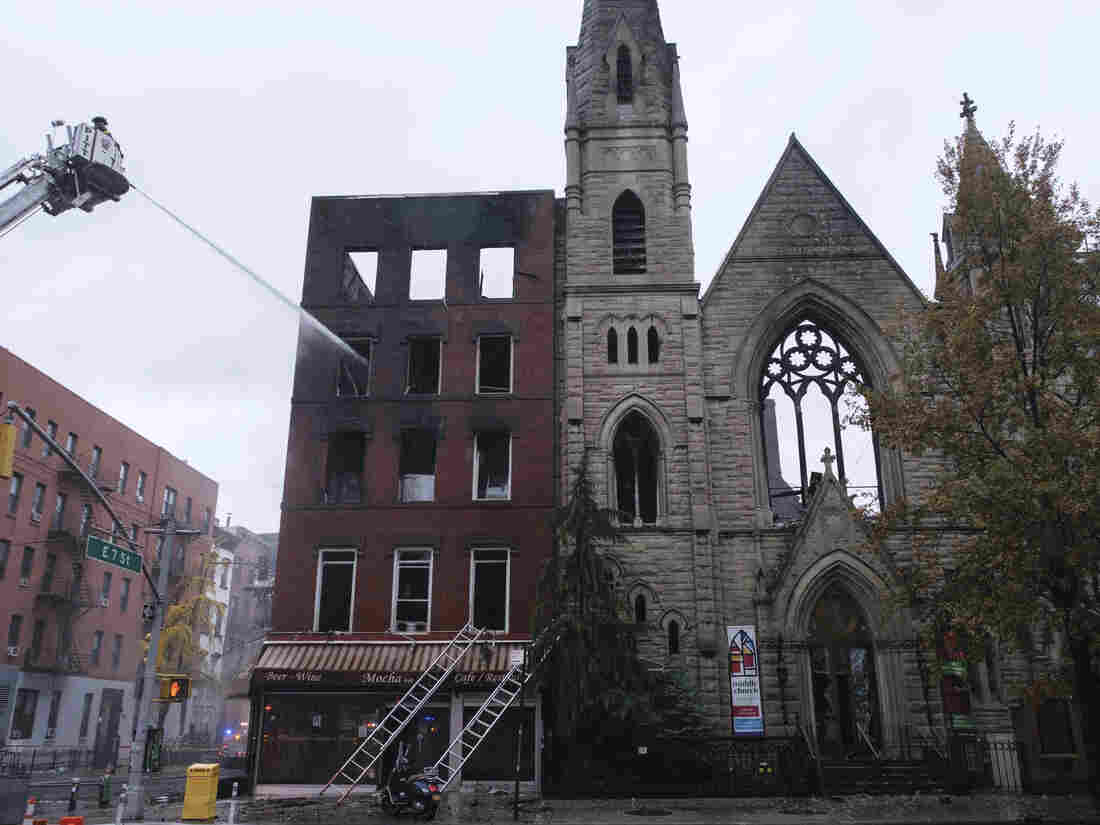 Firefighters work to extinguish a fire erupted from the building next to Middle Collegiate Church on Saturday. The historic church in lower Manhattan was gutted by a massive fire early Saturday that sent flames shooting through the roof. Firefighters work to extinguish a fire erupted from the building next to Middle Collegiate Church on Saturday. The historic church in lower Manhattan was gutted by a massive fire early Saturday that sent flames shooting through the roof.

A massive fire gutted a historic church in Manhattan that is home to “New York’s Liberty Bell,” which rang out to mark the birth of the U.S. in 1776.

The blaze broke out in an adjacent building just before 5 a.m. Saturday morning, the New York City Fire Department says, before spreading to the Middle Collegiate Church.

Video and photos from the scene show fire consuming the church with flames shooting through its windows and roof. The FDNY says firefighters arrived in three minutes to combat what grew into a 6-alarm fire that consumed the two buildings.

WABC-7 in New York reports that damage from the fire spread to a third building, but that occupants were able to evacuate.

FDNY Assistant Chief John Hodgens said there were four minor injuries to fire personnel and that the cause was under investigation.

A statement posted to church’s website said there had been no loss of life, but that congregation was devastated by the damage.

“We are devastated and crushed that our beloved physical sanctuary at Middle Collegiate Church has burned. And yet no fire can stop Revolutionary Love,” wrote the Rev. Jacqueline J. Lewis, the church’s senior minister in charge.

The statement also said churchgoers would meet digitally for services on Sunday, as they have since social distancing was put in place in March.

The church congregation’s history goes back nearly 400 years. Its first building was built in 1729, and the church moved to its current East Village location in 1892.

The church housed several Tiffany stained-glass windows and a skylight dome. Those were apparently lost in the fire.

“Unfortunately, it seems like it was pretty bad — the sanctuary is not in good shape and we have some beautiful Tiffany stain glass windows that are gone,” Middle Collegiate Church Minister Amanda Ashcraft told WABC-7.

The church’s tower also housed New York’s Liberty Bell, which rang out for the inauguration and death of every U.S. president, as well as for Sept. 11 remembrances and other occasions. The bell was cast in 1729, according to The New York Times. Its condition was unclear as of Saturday evening.

“I can’t count the number of times I walked past it and took in its humble beauty,” de Blasio tweeted.